Musings on the 'Thingness' of Art 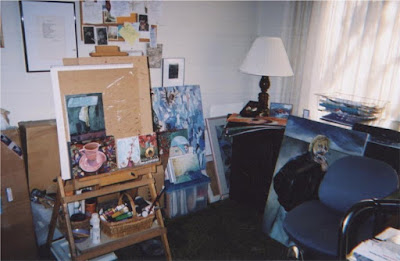 Many millennia ago, a young art student that I vaguely think just might have been me, was having an overly enthusiastic discussion after class with her art professor. Her words were pouring out fast as she expounded about her 'latest discovery', discoveries that seemed to happen nearly daily. On that particular occasion, again fevered by the grandeur and power of art, she was raving about the massive Baroque masterpieces in the Louvre and the magnificent, imposing scale of some of Jackson Pollock's drip paintings. Completely forgetting that she lived in a cramped two-bedroom apartment filled with two children, piles of textbooks and boxes of happy meal toys, she breathlessly exclaimed, "Oh, I so want to make such huge works, works that take up an entire wall!"

The professor's warm eyes crinkled at the corners. He was used to such exuberance, at least in her. Gently he replied,

"And that, my dear, is when you develop a storage problem." 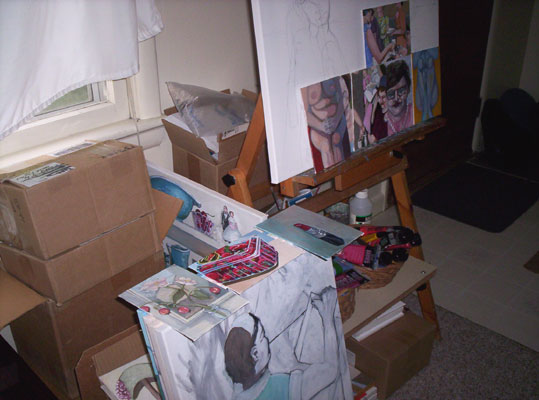 It's easy to get caught up in the romantic notions of art, the idea aspect of it. But we tend to forget that art is also an object, a thing, with all the requisite problems that entails. It has dimensions, it has weight, and yes, indeed, it can gather dust. It's great to dream big artistic dreams, but taking care of big paintings, and many of them at that, is quite another matter.

In the 1990s, when I was a student and then a professional artist, there was a craze where it seemed every non-profit and charitable foundation was looking for art to auction for worthwhile causes. I know that some artists really found it to be an affront to be asked to donate one of their works, either receiving no compensation if it sold, or a tiny percentage of the sale. I saw it as a golden opportunity to space clear my studio area, to move out all the odds and ends, and do something generous in the process. Auctions and donations really kept the creativity channel clear, so to speak, because my old work never really overstayed its welcome.

Casual art venues were also more prevalent then. The hipster coffee shop seemed to be on every street corner, and the owners and customers were craving exotic artwork almost as much as the latest latte. Although at one time, I was represented by three galleries in my state, it was the coffee shop that really gave me a tangible sense that all of my work mattered. Although I had one sell-out show, most of the time I would wind up with 'left-overs', those paintings that remained after the majority of the series had sold. These works may have been quieter, or more experimental, or might not have been in keeping with my typical style. These were the ones eventually scented with espresso on funky brick walls. It was fun to watch people who had never even attended an art event fall in love with a piece of art...it was fun for me, fun for so many of us in those days. Praise was wonderful, publicity was great, and of course, money was needed, but there was nothing like having a nearly empty studio because almost everything had found a home.  Now, that was a high.

But like almost everything in life, things have changed. Galleries, feeling cut out of the financial loop, started to clamp down on their represented artists engaging in such practices. The coffee shop went corporate, with tastefully mass-produced prints on their walls, and auctions once again returned annually only to the plush province of the stately museums. 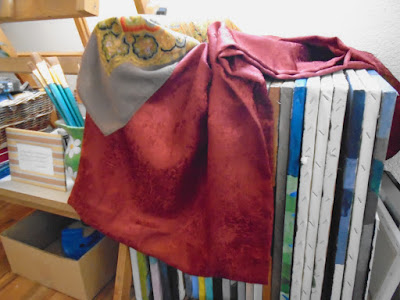 I am thrilled that out of the hundreds of paintings I have made, only a couple of medium-sized stacks of canvas and a few shoe boxes filled with smaller works under my bed remain. But this is about the limit that my small cottage home will contain, and I refuse to succumb to the solution of the storage unit. Not wanting to found buried under an avalanche of canvas, and yet still wanting to create has indeed influenced my present work-style. Except for the rare large panel, something I may obsess over for years, most of my work has shrunk radically in size, while expanding in thoughtfulness and detail. Where once I was captivated by art the size of billboards, now I realize that most often, my gems must be small. This work, by legendary Dutch artist, Johannes Vermeer, is only 9" x 8". I find it fascinating how many of his works are so detailed and yet so small, and wonder if he, too, dealt with similar problems.

Funny, that as my paintings become smaller, my concept of what art is has only grown larger. I find that I work more thoughtfully these days, as much concerned about where my idea will be finally be placed, as well as the idea itself. In other words, I realize that a painting takes up space and care in this world, and in my view, it must be worthy of that space. Process over product, quality over quantity, the very best I can do over just a bunch of dramatic attempts...this is the way I work today. And if my best-laid intentions still go awry and the work is languishing in a corner somewhere for a bit too long, I think of how Buddhist monks make sand mandalas that almost make your eyes ache with their beauty... and then simply sweep them into gray dust when they are finished.
It's okay now for me just to have the experience of making the piece, and learning what I had to learn, and standing knee-deep in that wonderful river of creativity. And while I admit I also have my sentimental side, being washed in that river is far too exhilarating to damn it up with old paintings, with stagnant limitations and longings. Now paintings are painted over or even destroyed to make room for something new, and there is no dreaded storage problem in my house--or, hopefully in my soul. I'm still working on the last part. Because there is this 'thingness' society associates with art, an artist who decides to be one for life, must become a quiet rebel and also seek out its intangible qualities. Setting a lovely table, putting the finishing frosting touches on a double chocolate cake, having a meaningful conversation...who's to say that this too is not art? Yes, the paintings of Monet's water-lilies are famous, but so were his lunches in the garden.  So this probably wasn't the article for you, if you were simply looking for storage solutions in your cluttered studio. Or maybe it was. Because art is so much more than stacks of canvas, or lumps of dried clay, or piles of manuscript paper. Art can be in every moment of how we live, from the jaunty scarf we decide to tie around our neck before heading out the door...to the way we answer the telephone. Art is living deeply and well, and it is the artist's job to make you pay attention to every breath.  And if the piles are making you forget that...throw them out. 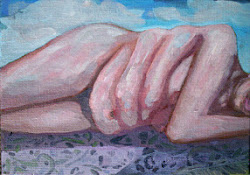 Hello and welcome. This site is intended to be a place where I will share my insights on the 'artist life'. I will be sharing what I have learned through twenty-five years of direct experience at the easel, as well as what I have learned as I have moved from a student to a free-lance teacher to a mid-career artist. I hope to be able to share honestly what it is like to dedicate a life to the pursuit of something so impractical, and yet so necessary in our world, and how I have not only shaped my work, but how it has shaped me.

Cory Jaeger-Kenat
Cory's acrylic paintings have been seen in Pennsylvania, Vermont, Montana, Idaho, Oregon, and Chicago, as well as accepted in juried auctions in California, Colorado, Georgia, and Wyoming. In 2001, her solo show 'Pressed Beneath a Heavy Sky' held at Toucan Gallery in Billings, Montana, garnered grant funds from the Barbara Deming Memorial Fund in New York City. She holds a degree in psychology with an art minor from Montana State University-Billings, along with an award for distinctive academic achievement. Cory currently resides in Montana. She continues to paint in her home, although her website at www.italics.us has connected her work to a national audience. Widowed in her early twenties, she remarried happily in 2004 and is the gushingly proud mother of two grown sons, a lovely daughter-in-law and even lovelier twin granddaughters.